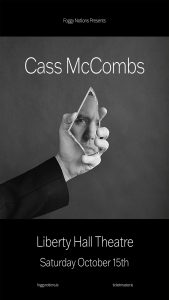 “I made this album as a way to handle the loss of some close friends. Their memories guided me throughout and hopefully they live through the music. Strange to realize, it wasn’t themwho were lost, it was me.” -Cass McCombs

Cass McCombs announces his tenth studio album, Heartmind, out digitally August 19th on ANTI-(vinyl available in September), a Dublin concert and presents the aching and epic country number, “Unproud Warrior” featuring Wynonna Judd and Charlie Burnham. Heartmind is an eight-song album that feels like a journey among assorted tuneful feelings somehow shaped to meet whatever it is a particular listener needs, to mirror whatever they bring to these uniformly incandescent and tragicomic tracks. Cass has set the stage, and allows the listener to pick the heroes and villains, the winners and losers, the jokes and the drags. He doesn’t want to present all the questions, let alone the answers. Lead single, “Unproud Warrior,” is a necessary anthem for these times, where we all seem to have opinions about the critical news of the day without ever quite knowing what to do about it. Invoking Stephen Crane, S.E. Hinton, and fast-food restaurants, it is an allegory about our perception and ownership of responsibility, set to an elegant country & western ache.

Cass recorded these songs in multiple sessions on both coasts, in Brooklyn and Burbank, co-producing with Shahzad Ismaily, Buddy Ross, and Ariel Rechtshaid — now a dozen years into his collaboration with Cass beginning with 2009’s Catacombs. Rob Schnapf (who previously produced Cass’ ANTI-debut, Mangy Love) mixed and merged it all. The aforementioned Judd offers harmonies, while her beau Cactus Moser provides some lap steel. Other contributors include Joe Russo, Kassa Overall, Danielle Haim, The Chapin Sisters, Frank LoCrasto, and Nestor Gomez. Where some may hear dark humor, others might hear relentless pain; where some may hear winning cynicism, others might hear harrowing nihilism. Cass writes songs that speak of his moment, and then lets everyone else decide how or even if they speak to their moment. These are honest offerings for absurdist times, funny confessions of frailty amid circumstances that often seem too tense for even the humble chuckle. On Heartmind, Cass enters the double-digit-album phase of his career, a quantitatively rarified place for any songwriter; rarer still, though, is the fact that he does not yet seem to have settled into a qualitative sound or pattern, of singing the same thought twice (or perhaps even once).