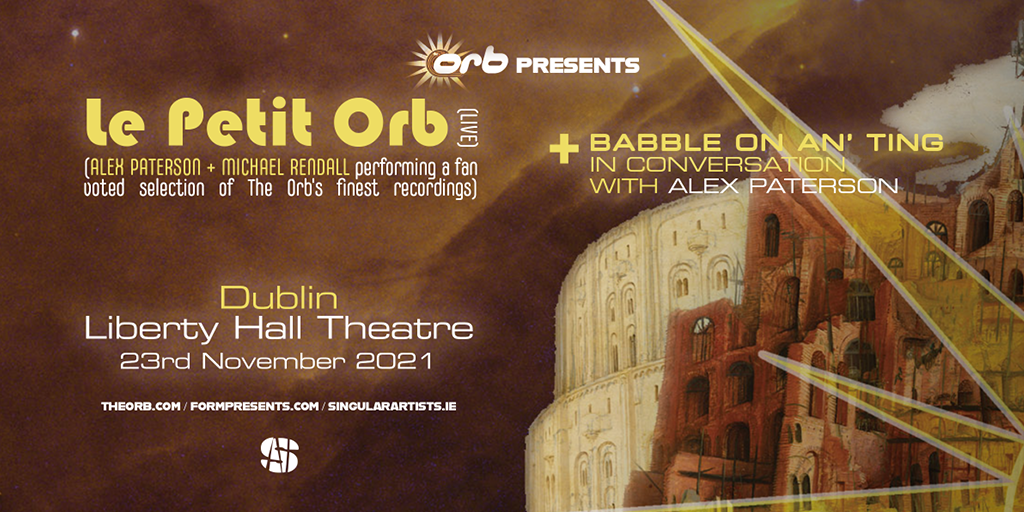 On sale Friday, 17th September at 9am

As the UK’s second lockdown was imposed, Alex Paterson, The Orb’s founder, knew that he needed to find a way to get back out there, reconnect with his fans, and perform live. He has announced a special show in Dublin’s Liberty Hall Theatre for 23rd November 2021. Tickets available from www.singularartists.ie on Friday, 17th September at 9am. The show will feature Alex P ‘In Conversation’ as well as performing the greatest hits of the Orb.

Originally born in the 90’s as The Orb reached the stratosphere and headlined Glastonbury but never wanted to lose touch with their intimate club roots, ‘Le Petit Orb’ not only provided a smaller unit to perform intimate shows but also spawned the album “Pomme Fritz”, considered to be an Orb classic by the cognoscenti.

So now it’s time for ‘Le Petit Orb’ again as Alex Paterson, along with Michael Rendall and Deep Visual Lighting, head out across the UK and Ireland this Autumn to perform a selection of The Orb’s finest recordings as voted for by YOU, the fans! (voting information provided to ticket holders).

And, as a real treat for Orb fans, each show will begin with an Alex Paterson interview and curated question and answer session as Dr Alex looks back over his amazing career, using his biography ‘Babble On An’ Ting’ as the reference book. Followed by a set of Orb classics and rarities.