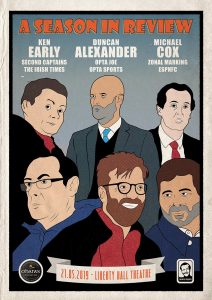 A SEASON IN REVIEW

The full-time whistle will have blown on the FA Cup final, the Premier League winners will be known and the Champions League final is on the horizon…come join us for an evening to review the Premier League season with all the TACTICS, all the STATS, and all the PASSION & BELIEF with Ken Early, Michael Cox & Duncan Alexander. With thanks to support from our friends at O’Hara’s Irish Craft Beers.

Ken Early is a journalist and broadcaster. He is currently a director of Second Captains & regular columnist for the Irish Times. One of his earliest exposures to sport was as a member of the Templeogue Swimming Club. Follow him @kenearlys @secondcaptains

Michael Cox runs the website Zonal Marking, focusing on tactical analysis, and also writes regularly for ESPN. His first book was The Mixer: The Story of Premier League Tactics, from Route One to False Nines & his second book is handily entitled Zonal Marking and is out in May. It’s about the evolution of modern European football. Follow him @ZonalMarking

Duncan Alexander is Opta’s Head of Editorial, co-creator of @OptaJoe, author of the OptaJoe’s Football Yearbook and regular contributor to the Totally Football Podcast. He has also written Outside the Box: A Statistical Journey through the History of Football. Opta is the world’s leading sports data provider & their mission is to create a global standard for live sports data. Follow him @oilysailor

Warming up proceedings with a cracking quiz, using the projector and fancy-modern-computery-stuff Ronan Leonard will host a live quiz – it will be very tough but fair and fun. We’ll have some of our panelist’s books as prizes for the winners. (1 phone per entrant needed).

It’s a fully seated venue, a fully stocked bar and you can even bring your drinks…to YOUR SEATS.

Please note that Liberty Hall is a cash-only venue.